‘Tis the season for Ghosts, and I’m in the mood for some Christmas Spirits. How about you?
The days are shorter and the nights longer, colder and the perfect time to cuddle up with a ghost story. (Ed. Note: The post was originally posted last December!)

Nothing rends my heart than that of love stories, a love that transcends everything even death. The euphoria of falling in love and being consumed by it only to find out you can’t be with that person you love because of a myriad of ghostly reasons; they’re a ghost, you’re a ghost, a ghost doesn’t want you to be together and might kill if you are. Let the devastation and heartache ensue. I’m talking about Ghost Romance.

Ghost Romance usually falls under the genre Paranormal Romance, but also could be Gothic Romance. Which means that the story needs to follow the Romance genre’s conventions and not written with the main intent to scare, as it is in horror. That is not to say your story can’t be creepy or scary. I much prefer the ones that are. But the driving force of a Ghost Romance should be the love story. You know, two people meet, they fall in love and ain’t love a bitch. The one hard and fast rule for romance is the HEA, or the happily ever after ending and therein lies the challenge for the author, finding a way for it all to work out and making the HEA believable. Sometimes it truly takes a Christmas miracle. 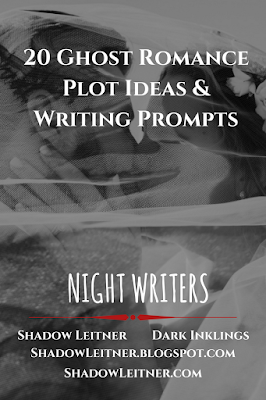 So, Night Writer, if you up for the challenge here are some Ghost Romance Plot Ideas and Writing Prompts for some inspiration.

Read any good Ghost Romance stories lately? Leave me your recommendations in the comments, I’d love to hear about them if you have.
Stay Beautifully Haunted!
♥ Shadow
Reposted with permission from Shadow Leitner’s Dark Inklings Blog

From the Gothic Writers Blog